is the symbol used throughout the app.

A DECOR project contains one or more datasets. When there are multiple datasets, they are different versions of the same dataset. It is not recommended to create datasets for different healthcare projects in the same DECOR project.

Datasets define of a set of realworld healthcare concepts. One can look at data sets as a “hierarchical glossary”. Dataset Concepts shall be well-defined and described and can be demonstrated with the following examples.

Datasets define of a set of realworld healthcare concepts, such as heart frequency, blood pressure, age, plan of care, immunisation, body weight etc. One can look at data sets as a “hierarchical glossary”.

The concept definition can be grouped so that ART-DECOR offers two types of concept: either group or item.

A group concept carries no value definitions, only child concepts, the items.

Item concepts have the same meta data plus a value domain, that is the declaration of the nature of expected data and that is populated with data in data collection situations.

Putting it together, the following example shows a small dataset that hierarchically arranges Vital Signs parameter. 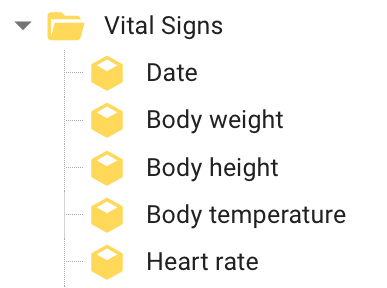 In ART-DECOR, groups can be expanded or collapsed which helps to get better oriented in larger datasets. In the following example, the Person group is expanded and the Vital Signs group is collapsed.

The following graphic shows that situation with the example of Vital Signs. The green area reflects the definition (that is the work done with ART-DECOR). Definitions and Specifications is the scope of ART-DECOR. 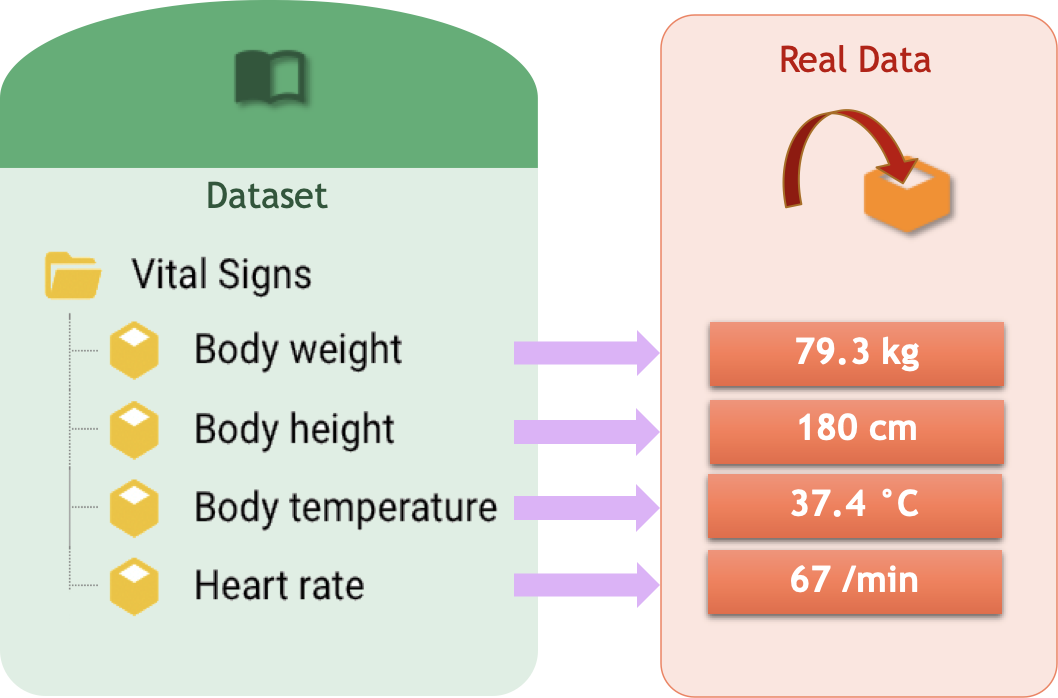 Concepts are the building blocks of a DECOR Dataset. A concept may refer to a simple feature, as simple as a person's name or birth date.

Hierarchical relations are very common. An example is the concept of a Person, which is defined by child concepts like the person's name, birth date, social security name, gender, and so on. An example of a medical concept can be blood pressure which is defined by (among others) systolic, diastolic and mean blood pressure plus information about the measurement (method, date).

A concept can also have an inherit relation with another concept, thereby specializing it. Or it can reference another concept by mains of a contains relation.

Concepts are defined in datasets. Other DECOR areas reference them, for example scenarios.

In essence, a data set item concept has the following fields.

Dataset Concepts shall be well-defined and described and can be demonstrated with the following examples.

Dataset Concept Names may be multi-lingual.

Dataset Concepts shall have a proper description, that is fit for persons in the team that are not healthcare providers.

Heart Frequency :: The number of times a heart beats within a certain period of time, typically within a minute.

Dataset Concept Descriptions may be multi-lingual.

A Dataset Concept may have multiple Synonyms, one or more terms (or abbreviations) that have the same meaning as the Concept itself

As explained earlier, a concept can be a group concept that carries no value definitions, only child concepts, the items, or an item concept that have the same meta data plus a value domain, that is the declaration of the nature of expected data and that is populated with data in data collection situations.

The possible values a concept can have can be defined and/or constrained by means of the Value Domain. A Value Domain specifies the type for a concept (e.g., string, identifier, code, date, quantity) by assigning a Datatype. In this chapter, datatypes are explained as the nature of data you expect when collecting real world data. A more technical and complete list of datatypes can be found at the Datatypes page.

When the type of the Value Domain is coded, one can specify a Choice List, which acts as a list of valid options when collecting real world data.

The concept Gender has a Value Domain with type code and a concept list of three concepts: male, female and diverse.

While most of the data types are self-explanatory such as string or text or date, coded data may carry a choice list offering a typical or exhaustive list of real world things that might be valid values for the item concept. Examples include the color of the iris (eye), which typically could have a choice list of “brown”, “blue”, “green” and “other”.

The following datatypes are available and supported.

steps (taken by a physiotherapy patient),

number of cigarettes smoked in a day

A system of valid symbols/codes, that substitute for specified concepts e.g. alpha, numeric, symbols and/or combinations, usually defined by a formal reference to a terminology or ontology, but may also be defined by the provision of text. Typically a symbol/code is expressed with a value for code, an identifier for the terminology or ontology it belongs to and at least one textual representation (display name).

Models rankings and scores, e.g. pain, Apgar values, etc, where there is a) implied ordering, b) no implication that the distance between each value is constant, and c) the total number of values is finite.

Note that although the term ‘ordinal’ in mathematics means natural numbers only, here any integer is allowed, since negative and zero values are often used by medical professionals for values around a neutral point.

Scores are commonly encountered in various clinical assessment scales. Assigning a value to a concept should generally be done in a formal code system that defines the value, or in an applicable value set for the concept, but some concepts do not have a formal definition (or are not even represented as a concept formally, especially in questionnaires. Scores may even be assigned arbitrarily during use (hence, on Coding). The value may be constrained to an integer in some contexts of use.

Any text item, without visual formatting.

A text item, which may contain any amount of legal characters arranged as e.g. words, sentences etc. Visual formatting and hyperlinks may be included.

Represents an absolute point in time, as measured on the Gregorian calendar, and specified only to the day. Semantics defined by ISO 8601. Used for recording dates in real world time. The partial form is used for approximate birth dates, dates of death, etc.

Represents an absolute point in time, specified to the second. Semantics defined by ISO 8601. Used for recording a precise point in real world time

the exact date and time of the birth of a baby

the origin of an history observation which is only partially known

This datatype has been introduced in April 2020 first.

Represents a time, specified to the second (hh:mm:ss). Semantics defined by ISO 8601. Used for recording a real world time.

for approximate times, e.g. the origin of an history observation which is only partially known

Quantitified type representing "scientific" quantities, i.e. quantities expressed as a magnitude and units. If not further specified with fractionDigits, a decimal number with optional decimal point.

There are some "special" quantities (used in healthcare), explained later:

Is a quantity, represents a period of time with respect to a notional point in time, which is not specified. A sign may be used to indicate the duration is “backwards” in time rather than forwards.

Items which are truly boolean data.

Things that are typically stored as binary objects in the computer world and need to be rendered appropriately.

graphic: diagrams, graphs, mathematical curves, or the like – usually a vector image

icons: a sign or representation that stands for its object by virtue of a resemblance or analogy to it

pictures: A visual representation of a person, object, or scene – usually a raster image

A ratio of two Quantity values - a numerator and a denominator.

The datatypes can be further restricted using the following datatype facets:

Facet timeStampPrecision is used for date / time aspects and takes the following values:

... are done in the Data set Tree only, preferably by simple drag and drop actions. To start MOVE click on a concept and choose the MOVE button. Concept context is needed especially in large data sets for orientation. A special separate (elevated) dialog appears. 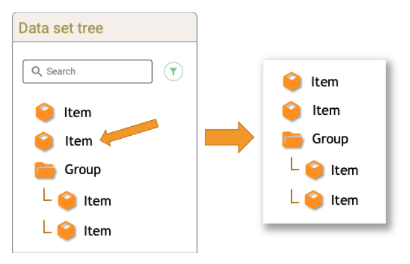 Moved items get a special flag* in the front end. The move is saved by submitting the Skeleton Tree to the API. The API re-arranges the whole dataset according to the skeleton, surrounded by a lock. 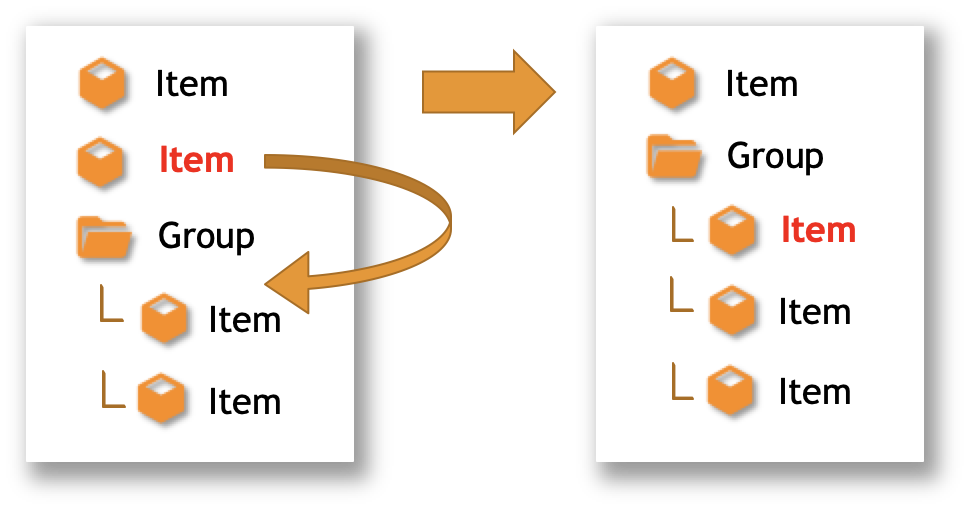 These features is described in a specialized chapter here.

You can naturally version a dataset. Typically a versioned dataset get a new id and a new effective date.

The concepts in the new dataset version keep their id, but get a new effective date and inherit from the original concept. If a concept needs changes it may be disconnected (de-inherit) from its source concept so editing is possible.

The name and other properties of a concept constitute its definition. This definition should be governed. This means that any property in any language is under governance. When project wants to re-use (inherit) these concepts they inherit this definition as-is, and only comments are allowed additions. These comment cannot in any way shape or form alter the semantics of the original concept

In multi lingual settings: when a project wants to re-use concepts from a building block repository (BBR) that does not have defining properties in the same language as the project, then the project can do one of the following things: